Starting with this decree, the Cretan Diet remains alive and presents itself as a health and longevity institution not only for the Cretans but for the world. 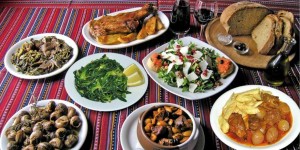 The characteristics of the Cretan diet

we wanted to sketch a rough pattern of the Cretan diet in the 1960s, we could say that the core of this diet consisted of food derived from natural sources, whereas food of animal origin was more peripheral in nature. In general, people consumed seasonal products, available in the wider local area, which underwent minimal processing or none at all.

Fresh and dried fruits, pulses, endemic wild herbs and aromatic plants, and rough cereals, whose cultivation was favored by the regional climate, were consumed in great amounts and constituted the base of the Cretan diet during that period. Dairy products were consumed on a daily basis in low to moderate quantities. Poultry and fish were consumed on a weekly basis in moderate quantities, whereas red meat was consumed only a few times a month. The main supply of fat was effectuated by olive oil, which was used not only in salads but also in cooking, unlike the northern European countries which primarily used animal fat.  Another essential feature of the Cretan diet in 1960s was the moderate use of alcohol, mainly red wine which accompanied meals. Finally, the most common dessert was fresh fruits, while traditional pastry based on honey had been consumed a few times a week.

Initially, the protective effect of the Cretan diet for human health was attributed to its high monounsaturated fat content, due to the daily use of olive oil, as well as to low saturated fat, due to the low consumption of red meat . At present, we are well aware that this particular nutritional scheme possesses important additional features, since it is a diet that, when applied in sufficient quantities, provides all the necessary micro-constituents (i.e. vitamins and minerals), and is rich in ω-3 fatty acids, vegetable fibres, antioxidants and various phytochemicals, which have significant influence on several body functions, and a beneficial effect on our health 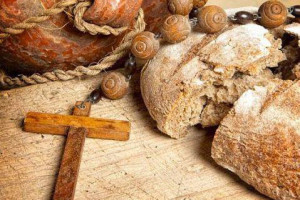 The role of keeping a fast

One of the factors that seem to have contributed to  the low consumption of food of animal origin that was observed in Crete during the study of the Seven Countries was the fact that during this period the Cretans kept to the fasts dictated by the Greek Orthodox Church to a great degree  Thus, the low consumption of red meat and dairy products is not attributed only to economic parameters since, despite the low incomes of the inhabitants, the majority of the population produced their own animal and vegetable products.  During the periods of fasting, however, animal products were stored in order to be used in non fast periods, and this tradition, apart from its contribution to a better state of health, was also important for the ecological and environmental balance. The days of fasting according to the Orthodox Church are 180-200 per year. Therefore, we are talking about a significant period of time which has contributed to a great degree to the overall food intake.

Cretan diet as a lifestyle

When we refer to the Cretan diet of 1960 we should take into consideration that the diet in question was applied under specific social conditions and constituted an inextricable part of a general lifestyle. Apart from the specific choice of food, there were probably numerous other factors which contributed to the beneficiary effects of this diet to human health.

Physical activity One of these factors is physical activity, as in the study of Seven Countries it has been demonstrated that 62% of men from Crete underwent intense daily physical activity, whereas only 7% of them had a sedentary life or mild types of activity. Intense physical activity, which was connected with necessary movements as well as with the type of work, seems to have contributed to the lower rates of body fat of men in Crete as compared to other populations. (Aravanis et al. 1970). Thus, the combination of Cretan diet with regular physical activity made the preservation of a healthy body weight possible.

Stability in the schedule of meals But apart from exercise, another important parameter of the Cretan lifestyle -as well as that of other Mediterranean populations- has been the stability in the schedule of meals. Steady meals at specific times of day appear to help the human organism to regulate the ingestion of food more effectively, in such a way that energy requirements are met, without, however, involving an over-consumption of food

Meals, a chance of family gathering Finally, it is significant that meals constituted an occasion for family gatherings, as well as for broader social interactions, and were regarded as a pleasant social experience. This is particularly important if we take into account that nowadays a large percentage of people have lunch or dinner in front of the TV –a habit which is related to the over-consumption of food, not only in adults but also in children. In the case of children, it has been suggested that watching TV during meals is one of the main factors contributing to the epidemic of child obesity 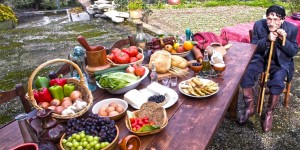 Based on the Cretan diet, the scientific community in the fields of health and nutrition in the 1960s defined the Mediterranean diet pattern, which has been the object of intensive scientific research during the past years. Results from the studies suggest that individuals who adopt this nutritional pattern present reduced risk against several chronic diseases, while various health indicators are also improved in these individuals. This is particularly important as, according to the World Health Organization, 60% of total deaths worldwide are due to chronic diseases and the adoption of attitudes related to a healthy lifestyle, such as nutrition, can significantly decrease occurrence of these diseases. Consequently, according to these data, returning to a traditional nutritional pattern should be considered as a necessity for all of us.